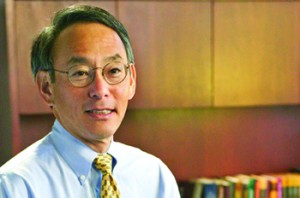 Nobel Laureate and U.S. Secretary of Energy Steven Chu says the U.S. must act quickly to take advantage of renewable energy’s potential. The Obama administration has made renewables a central focus of its energy platform, calling for major investments in wind and solar power.

U.S. Energy Secretary Steven Chu, in Denver for the World Renewable Energy Forum, called on Congress to extend tax credits that bolster the nation’s alternative energy industry.
“America can’t afford to miss out on the clean energy opportunity,” Chu said in prepared remarks at the forum in May.

President Barack Obama is pressing Congress to extend the Production Tax Credit, which saves wind farms $22 for every megawatt generated during the farm’s first 10 years of existence and is set to expire at the end of the year.

Those credits, Chu said, “are supporting companies and workers here in Colorado and across the country.”

Vestas Wind Systems, which employs some 1,600 workers at its wind-turbine plants in Colorado, has said it may lay off at least some of its employees based on whether it expects Congress will renew the Production Tax Credit.

While credits and incentives are propping up the alternative-energy industry now, Chu said the industry is getting closer to the point where it will be cost-competitive with traditional forms of energy.

“The market is getting bigger, the technology is getting better, and costs are coming down. The question is no longer if clean energy will become competitive with conventional forms of energy; the question is, ‘When will it happen?'”