Budgeting for a utility price increase Canary in the coal mine 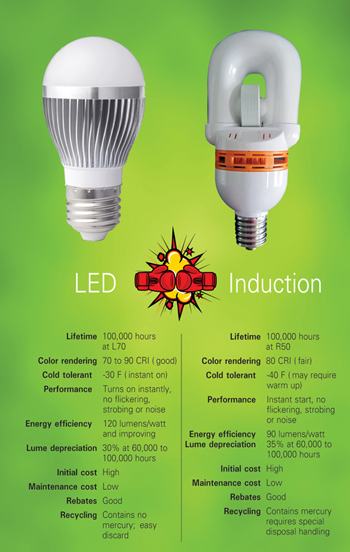 LED and induction lights are the longest lasting and best light for the dollar. It stands to reason that they are the two most common retrofit choices for multifamily applications where it’s inconvenient to change bulbs. So now which?

Getting their start from Nikola Tesla in the 1890s, induction lamps are basically fluorescent lights without filaments or electrodes (the part that burns out). Instead, they transfer power by magnetic field. The result is a lamp with an extraordinary life of up to 100,000 hours, or 11 years of 24/7 operation. They have been used for years at gas stations, warehouses and for street lighting, just to name a few applications.

LEDs produce light through electrons in a semiconductor material emitting positive-negative pulses. This newer technology has continued to improve, and garners more attention as researchers have solved the issues related to its color rendering, lumens and on-off performance. The final hurdle for LEDs has been price. LED prices continue to fall due to increased manufacturing efficiencies, however, the prices are generally higher than the equivalent induction products.

Which is right for your community? First consider your specific need. Do you want a wide cast of light or should it be directed? LEDs can do both. They take the lead in directional lighting but can be cost prohibitive. Induction lighting doesn’t have the directional capacity of LEDs, but takes the lead in high-level, broad lighting applications. You can’t beat the intensity of induction lighting with systems that deliver up to 36,000 lumens, whereas LEDs have barely broken the 20,000 lumens hurdle. This could change with time as LEDs continue to make great strides in R&D due to focus and research dollars aimed at LEDs. I’ve seen claims from both products stating they will last 100,000 hours. I’ve also seen claims that induction lights lose lumen strength between 60,000 and 70,000 hours. When shopping for either product, pay attention to lifespan claims as they vary by product and manufacturer.

What does this all mean? Induction lighting and LEDs both achieve impressive consumption savings but each have their own strengths, based on the application. Do your research and choose the best fit for your needs and budget.