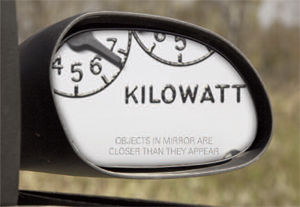 When they flick off light switches or ease off the gas pedal, many Americans feel they are doing their part to save energy. But the authors of a new survey say that consumers consistently ignore larger changes—more efficient appliances or vehicles, or the level of insulation in their apartment—that would cut fuel consumption far more dramatically.

The research from Columbia University is the latest attempt to probe the psychological roots of the energy problem, and to understand why it has been so hard to realize reductions in greenhouse gas pollution.

The survey showed that consumers gravitate to “low-effort, low-impact” actions on energy, rather than strategies that might reap higher rewards. The largest group, nearly 20 percent, cited turning off lights as the best approach to save energy—an action that the study authors said actually could affect energy budgets relatively little.

Only about 3 percent of the respondents cited more efficient cars or appliances.

“When people think of themselves, they may tend to think of what they can do that is cheap and easy at the moment,” said lead author Shahzeen Attari, a postdoctoral fellow at Columbia University’s Earth Institute. She said the people surveyed tended to believe in “curtailment” rather than efficiency. “That is, keeping the same behavior, but doing less of it,” she explained. “But switching to efficient technologies generally allows you to maintain your behavior, and save a great deal more energy.”

Some energy experts point out that turning out lights can amount to a large cut in consumption. “If you’re using 100-watt light bulbs, that’s not an inconsequential amount of electricity,” said Tom Simchak, Alliance to Save Energy, a D.C.-based nonprofit.

One of the factors that could be skewing perceptions is the way that energy efficiency information has been communicated, both  by policymakers and by industry. Attari’s team cited a paper by Duke University, “The MPG Illusion,” which showed that use of “miles-per-gallon” can be misleading.

What seems like a modest change in mpg terms, a switch from a 10-mpg gas guzzler to an 11-mpg sport utility vehicle, would actually save 100 gallons over 10,000 miles. That’s the same as a switch from a relatively high-efficiency 33-mpg car to a 50-mpg hybrid-electric model. “Even small improvements in mpg can be a lot of gas savings if you’re driving a really inefficient car,” says study co-author, Richard Larrick, professor at Duke University.

“You need to look at your refrigerator or your air-conditioner and realize it’s the SUV of your home, and there is an opportunity for big savings if it’s 10 or 15 years old,” Larrick said. “I do sometimes worry that the focus on light bulbs is creating a lot of 33-mpg-to-50-mpg” results—smaller savings than would be realized by a focus on appliances that are using far more energy.

Ironically, survey respondents who reported that they engaged in more energy-conserving behaviors actually had less accurate perceptions for reducing fuel and power consumption. Attari said that might be a reflection of unrealistic optimism about the actions they personally were choosing to take. Also, “single-action bias” might be at work—meaning that people tend to be willing to take one or two actions to address a perceived problem, but attention fades after they believe they have done all they can.

“We should be doing everything we can,” Attari said. “But if we’re going to do just one or two things, we should focus on the big energy-saving behaviors.”