From the Editor: An ounce of preparation Targeting utility use in apartments

Flashdance and the compactor 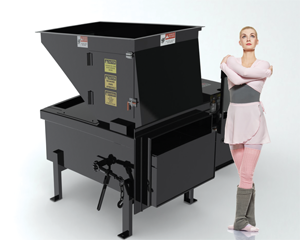 When evaluating trash enclosures, configuration, and community requirements, remember the movie, Flashdance. Not as much for the pressure washing of Jennifer Beals, as for the film’s powerful and innovative use of legwarmers. Remember legwarmers? They were iconic in the 80s.

Like legwarmers, compactors were iconic multifamily trash enclosures. In the 1970s and early 80s, as per-pick-up trash costs increased, owners and managers looked for meaningful ways to reduce the number of pick-ups at communities; enter compactors. We saved thousands of dollars, annually, by squishing our waste, and reducing the number of pick-ups. It did not matter whether the community was a stand-alone building, or a palatial garden-style community, compacters made sense.

During the 80s, the Internal Rate of Return (IRR) on a compactor could be less than four years in some markets. Since compactors have a useful life of about 15 to 20 years, compactors were awesome.

However, by 1989, consumers began to demand recycling. Recycling did to compactors what grunge did to legwarmers.

As residents became environmentally-aware, demand for trash options outside “squish it,” became more common. And with consumer adoption of recycling, came laws, like AB 939 requiring property owners to maintain certain percentages of recycle-versus-trash. Currently, trash providers regularly audit to determine if communities of five-units, or more, have appropriate trash-versus-recycle ratios. If we do not meet those requirements, we may be penalized. The need for trash, and recycling bins in the enclosures became prevalent.

What was wrong with compacting? In a garden style-community, where the trash enclosures are not large enough to contain both a compactor for trash, and bins for recycling, the compactor represents a cost center. Since the cost-per-pick-up on a compactor is typically more than that dumpster, and you can reduce your costs by adding recycling bins while decreasing the number of trash bin pickups, then your compactor might have reached functional obsolesce, making it cost-effective to remove the compactor. In many instances, the compactor itself is recyclable. A recycler may remove it at no cost to you, or actually pay you for the scrap metal.

Times have changed, and the IRR of a compactor has changed, even doubled in some markets. Additionally, when completing your analysis, be sure to look at the electrical load of your compactor; typically compactors run on 240 volts, and are motion-triggered. If you are in a region with high electricity rates, you could be in for a shock.

You should also consider the lower maintenance requirements of bins, when compared to compactors; there is no grease (from the trash bins themselves), and they do not require the same routine maintenance. Additionally there are cosmetic differences between bins and compactors. By removing the compactors, you eliminate the juice that is squeezed out when the compactor crushes its contents.

Remember Han Solo, Luke Skywalker and Princess Leah in the compactor on the Death Star in the Empire Strikes Back? Remember the black, murky sludge in which our heroes waded? We’ll call that juice. In space, that goo can simply be jettisoned into the vast emptiness, with no repercussions. In our communities’ trash rooms and enclosures, it delivers a memorable odor, and possibly afford us a supersized rat colony to boot.

Please don’t get the impression that legwarmers and compactors no longer have purpose. I love them both. I just believe that now, 30 years later, we must be smarter about our application. If your property is in a city like New York or San Francisco, your building may not offer open space for multiple bins, and may require a compactor to maintain a sanitary environment. If you have a building where you have both recycling and trash enclosures, you might be able to achieve a simple pay-back on your compactor. The right application matters.

Tread cautiously-if you have a giant garden-style community with loads of tiny trash enclosures, and you are still using compactors, as a friend, I am obliged to tell you that you might be wearing legwarmers over your jeans.

2 Responses to Flashdance and the compactor