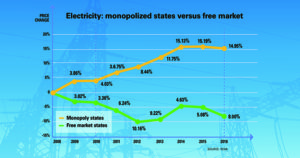 Apartment properties stand as one of the nation’s largest consumers of energy. As owners and operators feel the growing impact on their operations, the ever-evolving world of utility management shows a lot of promise in controlling costs and increasing both asset value and savings. 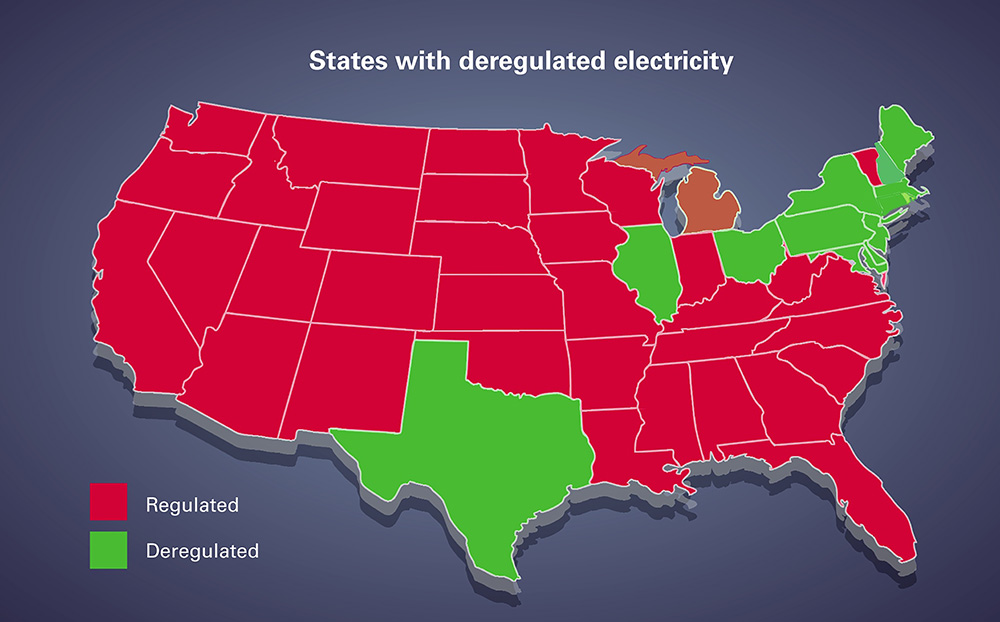 In the mid-1990s, under pressure to control costs at a local (retail) level, state legislators began efforts to decouple electric utility monopolies, with expectations that open market competition would be a more effective way to control costs. Electric utilities were separated into two businesses. Distribution would remain a monopoly while supply would be opened to competition. Deregulation of electricity was born.

Between 1996 and 2004, 17 states passed legislation to deregulate their electric industry, with each state creating its own unique market structure. Some market designs were not successful and have since halted deregulation; most notably the California market. Today, 13 states plus the District of Columbia have deregulated markets for electricity. These jurisdictions comprise one-third of the nation’s total electric consumption. Over 3 million commercial and industrial customers, and 16 million residential households procure their electricity through non-utility suppliers.

In 2016, over 72 percent of all eligible electric load within deregulated states was supplied by retail suppliers. This represents 85 percent of the commercial and industrial load and 49 percent of residential load.

Deregulated states enjoy not only the benefits of competitive energy prices, but also receive more pricing options and more innovative energy solutions. Those purchasing electricity through retail suppliers have seen an 8 percent decrease in prices since 2008, while customers in non-competitive states have seen an average 15 percent increase over the same period.

What this means for apartment owners and operators with properties in these markets is the opportunity to save money. Having energy market expertise is critical to ensure companies are maximizing these rate opportunities and making sound energy decisions. 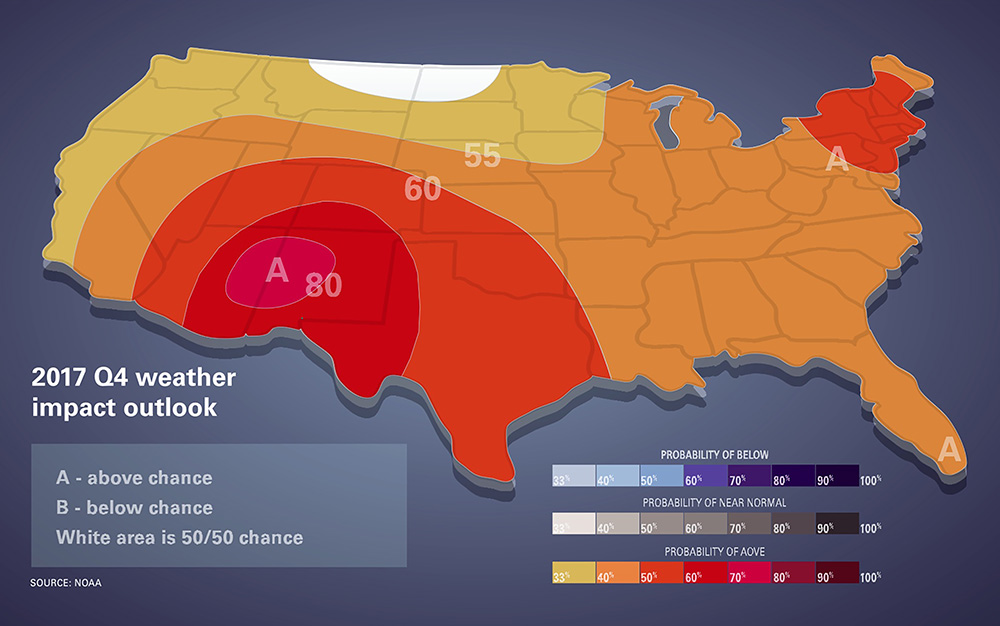 Weather plays a significant role in energy economics. When the temperatures go up, so does our demand for air conditioning. When electricity demand goes up and supply stays the same, prices naturally rise. Similarly in the winter, when temperatures drop, our furnaces get pushed for more heat. The higher demand for heating fuel coupled with a limited natural gas supply cause prices to rise.

The National Oceanic and Atmospheric Administration (NOAA) predicts that the nation will experience a mild fall. However, January is expected to be colder than average in many parts of the country. Energy prices should remain flat for the remainder of this year, however colder than average January temperatures may impact first quarter of 2018 prices.

Recently, hurricanes have been the big weather news. Hurricanes can wreak havoc on the energy markets because a significant portion of natural gas production comes from the Gulf of Mexico region. Any damage to drilling rigs, gas pipelines or processing plants can have a profound impact on getting gas to the market, and in turn, alter market prices. Hurricanes Harvey and Irma devastated the southeast, yet had very little impact on energy prices. Natural gas prices experienced a spike for a few days after Irma, but have since retreated under the $3/MMBtu threshold and long-term gas contracts remain attractive. However, we have another month of hurricane season remaining before we’re completely in the clear. 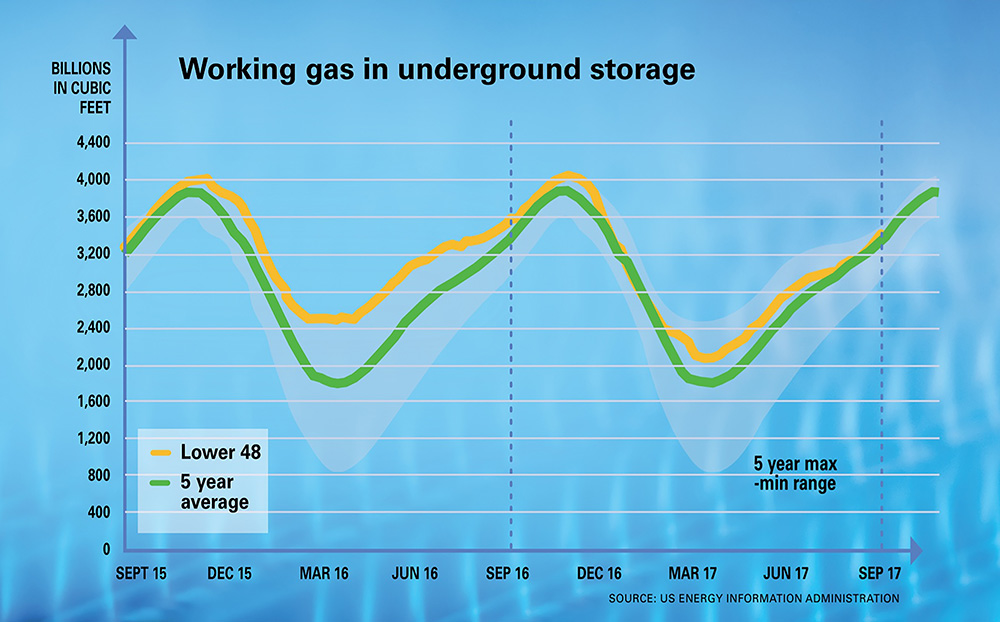 The U.S. produces over 95 percent of the natural gas it needs every year. In fact, as a result of the fracking boom and recent horizontal drilling technologies, we are now the world’s top provider of this resource.

Natural gas markets typically do not have supply challenges, but they do have transmission (pipeline) issues in getting the gas to consumers. Without sufficient pipeline capacity to move gas from well-heads to consumers during peak times, the equilibrium of supply and demand must be offset by natural gas storage. To offset the lack of pipeline, natural gas is stored in regional underground caverns during the summer months when demand is low and withdrawn during peak demand times in the winter. The level of natural gas in storage is critical to easing price volatility and fulfilling just-in-time market demand.

The Energy Information Administration (EIA) releases its Natural Gas Storage Report each week. This report indicates the nation’s level of stored gas and is a principal driver in natural gas prices. As of press, the EIA reported an injection of 97 BcfE—9 percent above analysts’ projections. BcfE stands for billions of cubic feet equivalent, a natural gas industry term of measurement for the amount of natural gas that is either untapped in reserves or being pumped and delivered over extended periods of time. This increase in injection levels decreased the NYMEX spot market price down from $3.081 to $2.946 (4.4 percent price drop in a few hours of trading). Current storage levels are 3.8 percent below same period last year and 2 percent above the 5-year average level.

We focus primarily on natural gas prices since gas prices lead electric prices. As natural gas prices increase or decrease, electric prices often follow suit hours, days or weeks later. Also, natural gas has a national price established on the NYMEX. Electricity is different because the U.S. is divided into multiple regional markets, each setting its own price and having its unique market rules. Most regions tend to move in the same direction but price volatility and generation vary considerably between regions.

At press, NYMEX spot prices for natural gas were trading down at $2.94/MMBTU after bouncing above the $3.00 threshold for the past two weeks. Looking longer term, the 12-month strip prices have dropped to $3.01/MMBtu for 2018. Electric 12-month strip prices in all regions are also seeing a dip.

Natural gas prices were trending slightly up and then showed a small spike after Hurricane Irma. The recent trading sessions have seen prices retreat back under the $3.00/MMBtu threshold. Long-term prices still look attractive for 2018. Mother Nature looks to be providing a mild fall, however that warmth will end as January looks to be below normal temperatures. 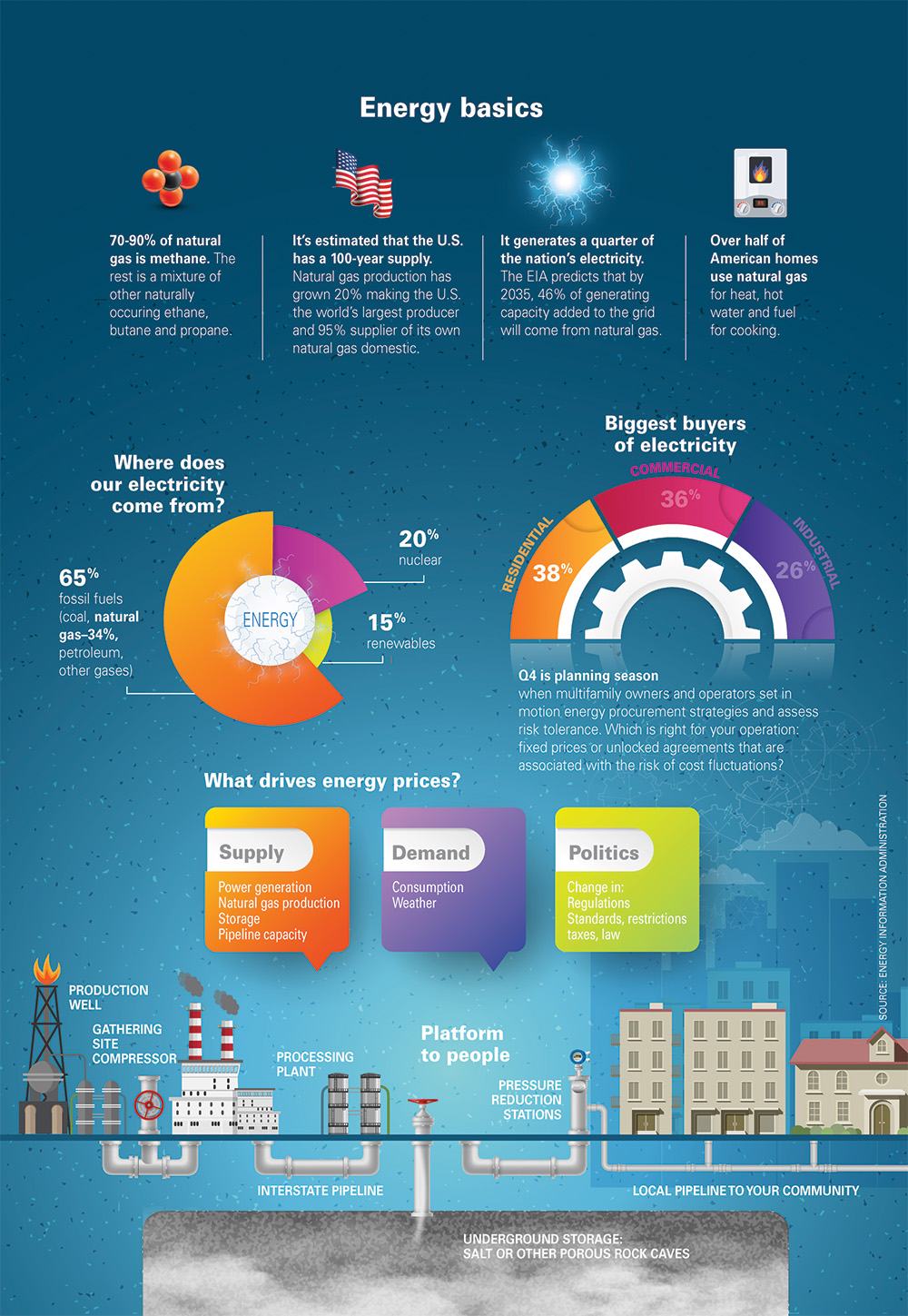 Dimitris Kapsis joined RealPage in June of this year, bringing over 15 years of energy expertise and leadership. Before joining RealPage, Dimitris and his team of energy experts helped AUM become the premier energy management provider to the multifamily. Kapsis previously served as director of energy management for Archstone. He is also active in the Association of Energy Engineers (AEE), the American Society of Mechanical Engineers (ASME), and the American Society of Heating, Refrigerating and Air-Conditioning (ASHRAE). He holds several professional certifications, including Certified Energy Manager, Certified Energy Auditor, Certified Sustainable Development Professional, and Certified Energy Procurement Professional.