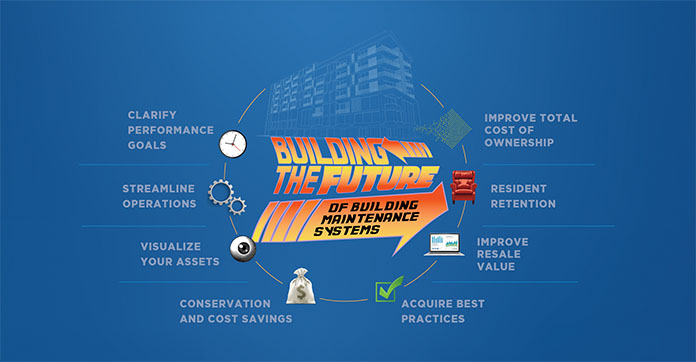 In 1985, the Robert Zemeckis’ blockbuster success, Back to the Future, landed in theaters. The movie thrilled audiences with its nostalgic view of the past (1950s) and its futuristic predictions of the future, like 24-hour-a-day news stations. This might sound twisted, but I love the moment when Biff repeatedly thwaps George McFly on the forehead saying, “Hello McFly!”

It’s my battle cry when I’m missing something obvious. I imagine Biff’s finger tapping my forehead. It’s then that I think about smart apartments, IoT, and ask myself, what we are really missing? Eeh gads! Building maintenance systems (BMS).

Most of us now have a few years experience with smart technology. We know the value— and heartburn—of smart thermostats, locks, lighting and leak detection. We’ve barked at Google Home and Alexa, begging it to answer a question or turn something on—or at the very least, we know someone who has told us about the experience in detail.

We’ve been pitched on the potential savings in utilities for both resident and owner, to better control turnover expense. While these are good things, Biff is still tapping my forehead, “Hello Mary, what about the building?”

Consider the most recent round of construction and the focus on sustainability and well-being. In many cases there are expenses that are entirely owner-paid (like house electric), which can comprise approximately 22 percent of total utility spend. If you compare this to the cost of turnover, which is typically less than 5 percent of total utility spend, it looks like we have an opportunity to dream bigger.

Have you looked at your building’s systems and fixtures lately? They are commercial-grade systems, yet the apartment industry has yet to integrate the same management controls that the commercial real estate industry has been using for over four decades. Yes. BMS has already been around since the 80s.

Think about it. If you have a garage, you have a mechanical ventilation system. If you have interior corridors, clubhouses, leasing offices—you’re likely running commercial-grade HVAC to condition those spaces.

What kind of IoT do you use to manage those systems? Does it really make sense to install a highly efficient HVAC system, yet not provide your facilities team with the tools to manage and proactively maintain it?

Fun Fact: 90 percent of buildings waste 20-50 percent of their energy. The age of the building has no correlation to the energy efficiency. It’s all about the tools, automation and proactive maintenance. As apartment developers construct more and more high-density product, why are we just thinking smart apartments? Think instead about how sexy your NOI might look if you, instead, considered smart communities.

Think, too, about our maintenance teams and how we’ve asked them to run 110 hurdles with their shoelaces tied together. In most instances, the systems we install are not connected. If you have a garden-style community with 20 buildings and each building has its own domestic hot water system, do you think your facilities team has the time to check the operational temperature of those systems daily? Even if there is a remote view of the performance of say, an HVAC system, it’s likely separate from the hot water system, garage ventilation system, pool system, and more.

How many different systems does the maintenance team need to monitor? Additionally, how much automation is integrated into those systems.

I chatted with a commercial building engineer regarding his BMS System. He loved it. He could maintain and service a building that was 15 minutes away from his desktop. I inquired what resources he would need if he did not have a BMS system. He indicated that he would need to increase his team size because they would be running around, less efficient and reactive instead of proactive.

He was also concerned that without a BMS automating HVAC temperatures that there would be an increase in events when spaces were uncomfortable and tenants complained.

Back to our design. When we are constructing and retrofitting to add smart apartments, we should at least acknowledge the elephant in the room: our communities. They should be smart, too. In many cases BMS can install on an existing asset; those commercial buildings that have installed retroactively saw a 2-3-year payback. If we are not looking at BMS when we are looking at IoT for our communities, we’ll ultimately have Biff drumming his finger against our forehead saying “Hello, McFly. BMS.” 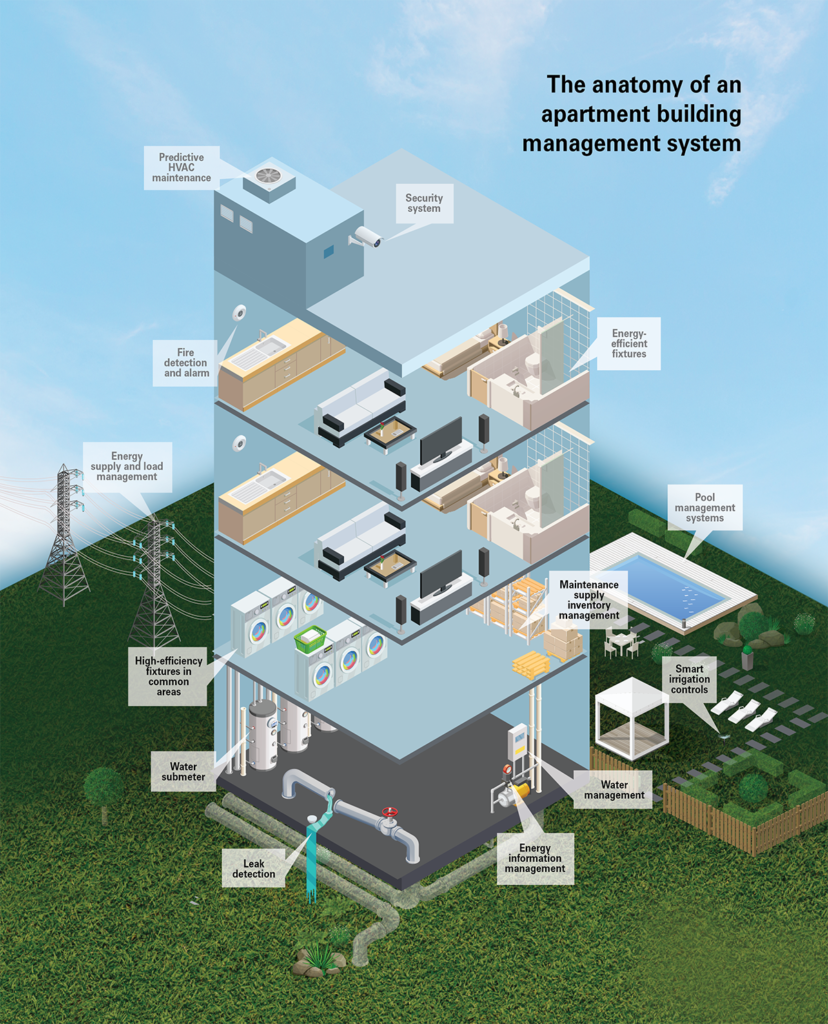